Avlite's solar powered, wireless controlled LED floodlight has been specifically designed for helipads to provide uniform surface lighting where the TLOF and FATO lights need to be supplemented with floodlighting. It offers a solar-powered, LED based solution to the ICAO touchdown and lift-off area perimeter floodlights. The self-contained solar powered light has an integrated solar and battery system, which means it can be installed in locations which do not have access to reticulated power - allowing safe illumination without the need to lay costly cabling or utilise generators. Housed in a weatherproof, powder-coated aluminium enclosure to withstand the harshest of environments ,the complete assembly has a low profile of less than 25cm and mounts to frangible points. The LED optic is specifically designed for helipad operations, and distributes the light evenly across the wide helipad surface. The angle of tilt of the LED luminaire can be easily adjusted to focus the light on the helipad to maximise illumination. The optic hood further prevents potential glare to pilots upon approach. AvliteḀ̴̂s solar powered floodlight utilizes the same wireless controller as the AV-425-RF and AV-70-RF models. This allows the single Avlite controller to control multiple Avlite fixtures including the solar range of; taxiway lights, approach lights, obstruction lights, lighted windsock and other products. All fixtures, including the floodlight, can be wirelessly operated independently of each other or controlled as a single group. 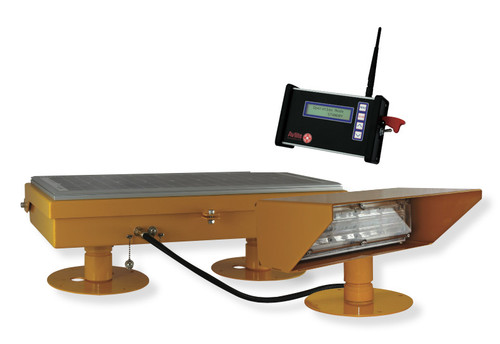