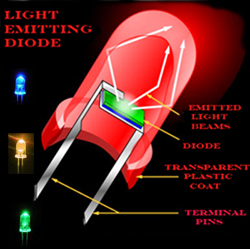 LED ADVANTAGES
There are a number of benefits to be gained from the use of LED lighting.

Efficiency
LEDs are extremely energy efficient and consume up to 90% less power than incandescent bulbs. Since LEDs use only a fraction of the energy of an incandescent light bulb there is a dramatic decrease in power costs. Also, money and energy is saved in maintenance and replacement costs due to the long LED lifespan. Because of the low power usage of the LEDs they are becoming extremely popular for light sources in remote areas that use solar panels. LEDs do have a higher initial cost than incandescent and compact fluorescent light bulbs, but the cost is quickly recouped over time in lower electricity costs.

Durability
LEDs are solid state lighting devices that utilize semiconductor material instead of a filament or neon gas. LED light is a tiny chip encapsulated in an epoxy resin enclosure, which makes LEDs far sturdier than traditional incandescent light bulbs or fluorescent tubes. LEDs do not use fragile components such as glass and filaments which means LEDs are able to withstand shock, vibration and extreme temperature.

Safety
Improved safety may be one of the most important benefits of LED lighting. LED lights generate virtually no heat. Let me repeat no heat. This means LED lights are cool to the touch and can be left on for hours without incident or consequence if touched. LEDs produce 3.4 btu's/hour compared to 85 btu's for incandescent bulbs. The downside of incandescent is they expel 90% of the energy it consumes via heat. And as all of us know incandescent light bulbs get hot, real hot to the touch. LED lighting reduces the potential for safety risks of burns and fires.

Environment
LED lighting devices are made from non toxic materials, unlike fluorescent lighting that uses mercury that may pose a danger to the environment. LEDs are also recyclable and considered “Green or Earth Friendly”.

LED Lighting Features and Benefits Overview
Efficiency: LEDs use up to 90% less power than traditional lighting. Longevity: LEDs have up to 50,000 hour Lifespan. Durability: LEDs are much more rugged than traditional lighting. Safety: LEDs generate virtually no heat. Safe to the touch and reduce fires. Environment: LEDs are made from non toxic & recyclable materials.

LEDs main advantage is efficiency. In conventional incandescent bulbs, the light-production process involves generating a lot of heat (the filament must be warmed). This is completely wasted energy, unless you're using the lamp as a heater, because a huge portion of the available electricity isn't going toward producing visible light. LEDs generate very little heat, relatively speaking. A much higher percentage of the electrical power is going directly to generating light, which cuts down on the electricity demands considerably.

LEDs were too expensive to use for most lighting applications because they're built around advanced semiconductor material. The price of semiconductor devices has plummeted over the past decade, however, making LEDs a more cost-effective lighting option for a wide range of situations. While they may be more expensive than incandescent lights up front, their lower cost in the long run can make them a better buy. In the future, they will play an even bigger role in the world of technology.

LEDs have several advantages over conventional incandescent lamps. For one thing, they don't have a filament that will burn out, so they last much longer. Additionally, their small plastic bulb makes them a lot more durable. They also fit more easily into modern electronic circuits.

LEDs are just tiny light bulbs that fit easily into an electrical circuit. But unlike ordinary incandescent bulbs, they don't have a filament that will burn out, and they don't get especially hot. They are illuminated solely by the movement of electrons in a semiconductor material, and they last just as long as a standard transistor.

LEDs have several advantages over conventional incandescent lamps. For one thing, they don't have a filament that will burn out, so they last much longer. Additionally, their small plastic bulb makes them a lot more durable. They also fit more easily into modern electronic circuits.